EMI facility is available for any product. However, one must make the purchase from any of the branches of Ryans. Ryans does not offer EMI facility for online purchases. To avail EMI facility, an order of at least BDT 5,000 have to be placed, regardless of the price of individual items under the order. EMI Offer is applicable for a tenure of 3,6,9 and 12 months. Plus, the offer is available with 0% interest and there is no hidden charge. This facility can be availed through the credit cards. Only the "Regular Price" mentioned on the Ryans website or quotation applies to any purchase to be made using EMI as the payment method. For further queries and support, call @ +8809604442121, +8801755662121
EMI will be available from 16 banks. 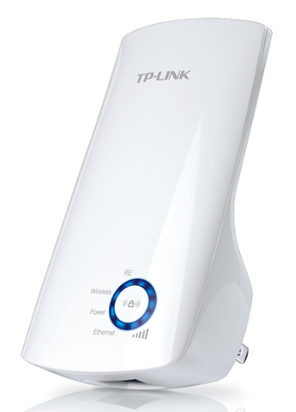 Tired of Wi-Fi ’’dead zone’’? TP-LINK’s range extender connects to your router wirelessly, strengthening and expanding its signal into areas it can’t on its own. The device also reduces signal interference to ensure reliable Wi-Fi coverage throughout your home or office.

Press the WPS button on your router and the Range Extender button on your 850RE within minutes to easily connect to the network. Once connected with an existing router, you can simply unplug and plug the TL-WA850RE back in a location for the best signal quality and coverage in your house, without needing to configure the extender again.

The TL-WA850RE’s single Ethernet port allows the Extender to function as a wireless adapter to connect wired devices like Blu-ray® players, gaming consoles, DVRs and Internet TVs. At the same time, the device can share the wireless network as well.

5 signal lights show the strength of signal that TL-WA850RE receives from the existing router, which can help to find the right location to place the range extender.

I have found any problem.The delivery time was good and fast.Found the product fresh and nice just as expected