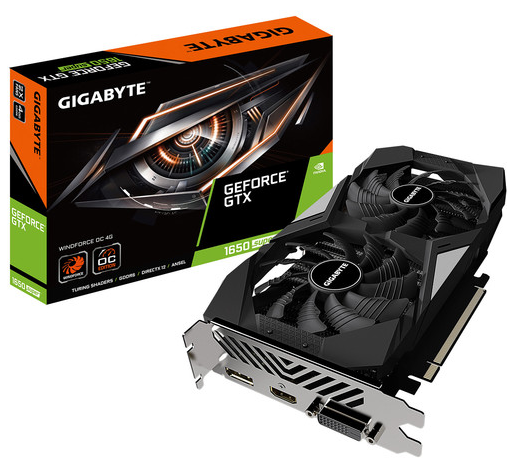 With the Gigabyte GeForce GTX 1650 SUPER WINDFORCE OC Graphics Card, you'll be able to play your favorite PC games in Full HD 1080p resolution. Based on the Turing architecture, this GPU provides improvements in performance, memory bandwidth, and power efficiency over its predecessor, the high-performance Pascal architecture. As opposed to the original GTX 1650, the GTX 1650 SUPER utilizes GDDR6 VRAM.

The front panel of the card features a variety of outputs, such as DisplayPort 1.4, HDMI 2.0b, and DVI-D DL, so you can connect to multiple external displays. This card features Gigabyte's WINDFORCE 2X cooling system. The cooling system uses two 90mm fans. The airflow is split by the triangle fan edge and guided smoothly through the 3D stripe curve on the fan surface. The 3D Active Fan feature provides semi-passive cooling, which means the fans will remain off when the GPU is under a set loading or temperature for low power gaming.

With Ansel, gamers can compose the gameplay shots they want, pointing the camera in any direction and from any vantage point within a gaming world. They can capture screenshots at up to 32 times the screen resolution, and then zoom in where they choose without losing fidelity. With photo-filters, they can add effects in real-time before taking the shot. And they can capture 360-degree stereo photospheres for viewing in a VR headset or Google Cardboard.

NVIDIA's parallel computing platform which enables an increase in computing performance by harnessing the parallel nature of GPU processing. CUDA-compatible applications can assign intensive parallel computing tasks, such as real-time video rendering, to the GPU to process, freeing up the computer's CPU to run other tasks.

When used with a monitor that has G-SYNC hardware installed, the monitor's refresh rate will sync and lock with the graphics card's output frame rate. Establishing this sync removes tearing and stuttering which can result from conventional fixed screen refresh rates, especially important for gaming in stereoscopic 3D. An additional benefit of G-SYNC is reduced lag so gamers will benefit from the improved command response time as well.

Customer Questions
Q:
Vaiya aita available kobe hbe
By Samshul arefin
A:
Sir, currently unavailable. but we will try to restock as per your requirement. Thanks for your interest.
By Ryans Computers Ltd.
Your Question

Customer Reviews
GG
By Badhon
Very good product! 1650 super is really good. I got in my PC it's really good for gaming too!
By Arian nice
Your Review