Cash on Delivery or COD means the price can be paid in cash at the time of delivery (only for delivery in Dhaka, Chittagong, Khulna, Rajshahi and Barisal). Payment can be done through bKash, mCash, Upay, and Rocket. Cards like Visa, Mastercard h-100 or DBBL Nexus card h-100 can be used in the payment process.

Ordered products are delivered by courier under the supervision of Ryans. Only in the case of Dhaka, Chittagong, Khulna, Rajshahi and Barisal the goods are delivered to the address of the recipient. To other districts outside, the recipient will be able to receive his/her product from the following pickup points given below. In addition to these pickup points, we also ship goods to 64 districts by courier.

Enjoy EMI Facility From These Banks

EMI facility is available for any product. However, one must make the purchase from any of the branches of Ryans. Ryans does not offer EMI facility for online purchases. To avail EMI facility, an order of at least BDT 5,000 have to be placed, regardless of the price of individual items under the order. EMI Offer is applicable for a tenure of 3,6,9 and 12 months. Plus, the offer is available with 0% interest and there is no hidden charge. This facility can be availed through credit cards. Only the "Regular Price" mentioned on the Ryans website or quotation applies to any purchase to be made using EMI as the payment method. For further queries and support, call @ +8809604442121, +8801755662121
EMI will be available from 23 banks.

It is the part of the video card that plugs into computer's motherboard.
DirectX Support
12 Ultimate 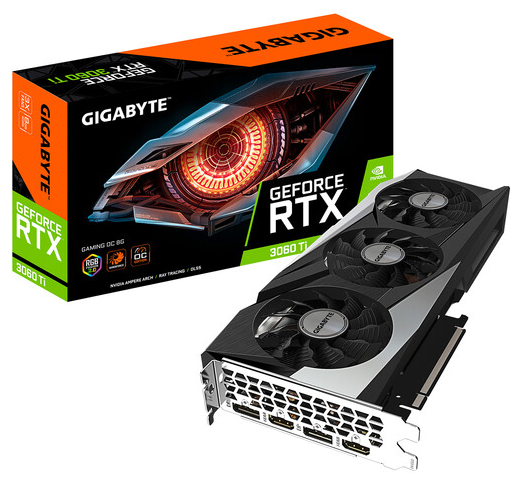 Based on the Ampere architecture and designed to handle the graphical demands of 1080p at high frame rates as well as 1440p gaming, the Gigabyte GeForce RTX 3060 Ti GAMING OC Graphics Card brings the power of real-time ray tracing and AI to your PC games. The GPU features 8GB of GDDR6 VRAM and a 256-bit memory interface, offering improved performance and power efficiency over the previous Turing-based generation.

This card features Gigabyte's WINDFORCE 3X cooling system. The cooling system uses three 80mm fans. The airflow is split by the triangle fan edge and guided smoothly through the 3D stripe curve on the fan surface. The 3D Active Fan feature provides semi-passive cooling, which means the fans will remain off when the GPU is under a set loading or temperature for low power gaming. It also has RGB FUSION 2.0, which has 16.7 million customizable color options and a variety of lighting effects. You can also use it to synchronize with other AORUS devices.