Others
Memory Bandwidth: 448 GB/s, DisplayPort version: 1.4a, HDMI version: 2.1, 2.0 (The middle HDMI output supports up to HDMI 2.0), SLI Support: N/A, MAX-Covered cooling, LCD Edge View, RGB Fusion 2.0, 6 video outputs, Protection metal back plate
Specialty
In the AORUS dimension, everything is constructed digitally. The lighting and patterns are mapped onto the products with an efficient, free flowing style. The Max-Covered cooling features 3x 100mm unique blade stack fans with wind claw design and alternate spinning, so the air pressure can completely cover the heatsink. With 16.7M customizable color options and numerous lighting effects, you can choose lighting effects or synchronize with other AORUS devices. GeForce RTX 3060 Ti with 8G memory and 448 GB/s memory bandwidth has 4864 CUDA Cores, 2nd gen ray tracing cores and 3rd gen tensor cores operating in parallel. It is the most suitable solution for those who are gaming, rendering, and developing A.I. technology.
Country Of Origin
Taiwan
Made in/ Assemble
China 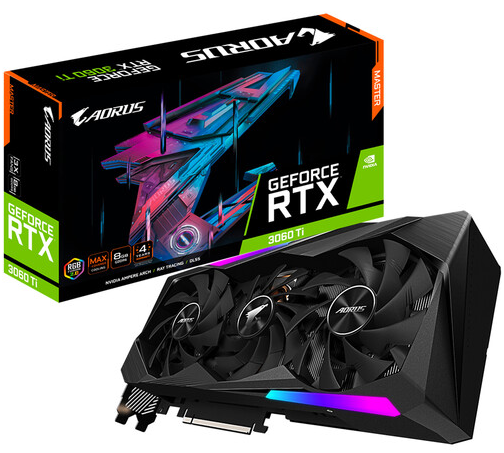 Experience today’s biggest blockbusters like never before with the visual fidelity of real-time ray tracing and the ultimate performance of AI-powered DLSS.

NVIDIA DLSS is groundbreaking AI rendering that boosts frame rates with uncompromised image quality using the dedicated AI processing Tensor Cores on GeForce RTX. This gives you the performance headroom to crank up settings and resolutions for an incredible visual experience. The AI revolution has come to gaming.

UP YOUR CREATIVE GAME

Take your creative projects to a new level with GeForce RTX 30 Series GPUs. Delivering AI-acceleration in top creative apps. Backed by the NVIDIA Studio platform of dedicated drivers and exclusive tools. And built to perform in record time. Whether you’re rendering complex 3D scenes, editing 8K video, or livestreaming with the best encoding and image quality, GeForce RTX GPUs give you the performance to create your best.

Steal the show with incredible graphics and smooth, stutter-free live streaming. Next-generation hardware encoding and decoding combine to show off all your best moments in exquisite detail. And the all-new NVIDIA Broadcast app gives you powerful AI capabilities to improve audio and video quality with effects like virtual background, webcam auto frame, and microphone noise removal. So you can give your audience your best—every time.

Based on the Ampere architecture and designed to handle the graphical demands of 1080p at high frame rates as well as 1440p gaming, the Gigabyte AORUS GeForce RTX 3060 Ti MASTER Graphics Card brings the power of real-time ray tracing and AI to your PC games. The GPU features 8GB of GDDR6 VRAM and a 256-bit memory interface, offering improved performance and power efficiency over the previous Turing-based generation.

For cooling, Gigabyte implemented a Max-Covered cooling system. It features three 100mm unique blade stack fans with a wind claw design and alternate spinning, so the air pressure can completely cover the heatsink. There is also a large copper plate with composite heat pipes that come in direct contact with the card, allowing for efficiently transfer the heat generated to the heatsink. It also has RGB FUSION 2.0, which has 16.7 million customizable color options and a variety of lighting effects. You can also use it to synchronize with other AORUS devices.