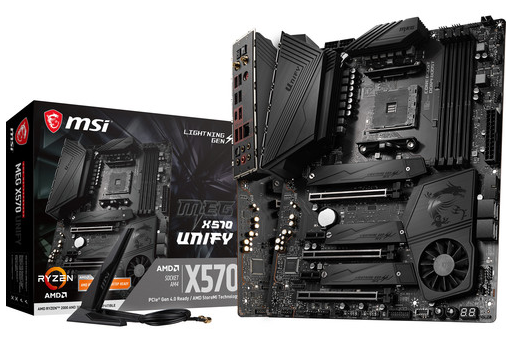 The MSI MEG X570 UNIFY AM4 ATX Motherboard is built on the AMD X570 chipset, supporting second- and third-generation AMD Ryzen processors with an AM4 socket. It has four memory slots for up to 128GB of dual-channel DDR4 RAM, which can be overclocked to up to 5000 MHz and above. For storage, it's equipped with four SATA III ports and three M.2 slots. Moreover, there are three PCIe 4.0 x16 slots for graphics cards and two PCIe 4.0 x1 slots for other PCI-based hardware. Other integrated features include Realtek RT8125 2.5 GbE, Intel AX200 Wi-Fi 6, Bluetooth 5.1, and Realtek ALC1220 7.1-channel HD audio.

The AMD X570 chipset is designed around 3rd generation AMD Ryzen 3000-series processors. Along with multiple improvements, its most noteworthy one is the addition of PCIe 4.0. PCIe 4.0 has roughly double the bandwidth of PCIe 3.0, which is beneficial for graphics cards, networking devices, NVMe drives, and more.

Aside from the increased transfer speeds with PCIe 4.0, MSI's Lightning Gen 4 PCIe slots are reinforced with steel and built with a server grade PCB for additional durability. Please note that PCIe 4.0 is backwards compatible with PCIe 3.0.

MSI motherboards utilize heavy-duty heatsinks on the MOSFETs for reliable processor power delivery and on the chipset to ensure the system stays operational under intense workloads. It's also equipped with multiple DC/PWM fan headers for users to connect additional cooling solutions. Users can set their cooling preference (Boost/Balance/Silence) as needed within the Dragon Center software or its UEFI BIOS. Moreover, MSI's M.2 SHIELD FROZR heatsink helps to prevent SSD throttling.

With the addition of PCIe 4.0, M.2 storage solutions can operate at up to 64 Gb/s with an appropriate card. This motherboard is equipped with three M.2 slots and four SATA III ports for traditional hard drives. Additional features include:

This motherboard is built with multiple hardware and software enhancements to improve sound quality including: